Polyploidy – from evolution to development?

Posted on October 10, 2018 by Flowering Highlights

A large variety of molecular mechanisms regulate developmental processes. Transcription factors entered the stage already decades ago and are still widely considered master regulators of development (Wray et al., 2003). However, in the past years it has been demonstrated that many other biomolecules play pivotal roles in development. This includes histone modifying complexes, small RNAs and long          noncoding RNAs (Holoch and Moazed, 2015, Venkatesh and Workman, 2015). In almost all those cases, the developmental importance of a regulatory mechanism is demonstrated first. This is often then followed by evolutionary considerations and phylogenetic studies. For example, transcription factors now play a central role in evo-devo research, and changes in transcription factor function are proposed to have played important roles in the evolution of plant and animal body plans (Cheatle Jarvela and Hinman, 2015, Rodríguez-Mega et al., 2015). Likewise, microRNAs have been implicated in major evolutionary transitions (Peterson et al., 2009).

In contrast to those regulatory molecules, another mechanism that has far-reaching consequences for cellular processes has mainly been discussed in the ecological and evolutionary arena: polyploidy (Ramsey and Ramsey, 2014). The doubling of the entire genome has long been implicated in the origin of new species or even entire new clades. Polyploidy has recently gained even more attention with the discovery that many plant lineages underwent polyploidization events in the past. Current evidence indicates that polyploidization is associated with an increase in diversification rates and possibly also with the origin of evolutionary novelties (Schranz et al., 2012, Landis et al., 2018). 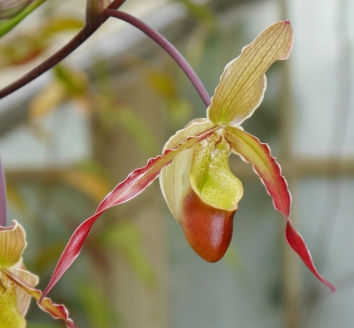 Compared to the importance of polyploidy in evolutionary research, it has gained relatively little attention in plant developmental biology. This is to some extent surprising, as it is well established that different somatic cells of a plant can differ in their ploidy level (Traas et al., 1998). At the same time, it is also known that there is a direct relationship between e.g. the size of a cell and its ploidy level (Traas et al., 1998). Thus, heterogeneity at the cell level and phenotypic output might be directly linked.               Bateman et al., (2018) explored this link between polyploidy and developmental patterning further by analysing orchid flowers. Orchids are an especially interesting study subject as the floral structure of many orchids is quite elaborate, showing extensive micromorphological diversification. Thus, one question that arises is whether those intricate morphologies are in part brought about by different ploidy levels in different cells.
Bateman and colleagues used microscopy to measure the size of nuclei in different regions of the labellum – a highly specialized petal-like organ of orchids. They complemented those studies with flow cytometry, which provides an independent and more quantitative estimate of nuclear genome sizes in different organs, but lacks the cellular resolution of microscopic measurements (Bateman et al., 2018).

Intriguingly, the authors find significant variations of the ploidy level depending on the labellum region. Polyploidy was especially pronounced in trichomes of the labellum. Those trichomes were also among the largest and most complex cells analysed, confirming that there might be a direct link between cell size and ploidy level. In addition, the flow cytometry data provided some evidence that the ratio between different ploidy levels is tissue- and organ-specific, with leaf material showing a relatively high percentage of diploid and tetraploid nuclei whereas in the labellum diploid nuclei were very rare and higher ploidy levels dominated (Bateman et al., 2018). Also, different labellum regions showed different flow cytometry signatures, indicating that some kind of ‘ploidy code’ might be applicable to distinguish different organs and tissues.

The authors further speculate that the size increase often observed in polypoid cells might, if cells are embedded in a tissue, lead to local distortions that may in turn contribute to the elaborate three-dimensional structure of many orchid labella. Interestingly, data from giant polyploid cells in Arabidopsis sepals support this notion. In this case, the large cells are required for the curvature of the sepals (Roeder et al., 2012).

The study of Bateman et al., (2018) provides an exciting starting point for further research. After polyploidy research has taken evolutionary biology by storm the time seems right to explore its relevance for developmental mechanisms.

Flowering Newsletter published by the Journal of Experimental Botany
View all posts by Flowering Highlights →
This entry was posted in flowering and tagged cell size, labellum, orchids, polyploidy, Rainer Melzer. Bookmark the permalink.