Posted on June 1, 2018 by Flowering Highlights

Since their discovery about 20 years ago, the TCP domain transcription factors have been shown to control diverse aspects of plant growth and development (reviewed in Nicolas and Cubas, 2015). The functions of class II TCP proteins, including the CINCINNATA and CYCLOIDEA/TEOSINTE BRANCHED1–like proteins, have been attributed to leaf development, floral symmetry patterns (zygomorphy) as well as outgrowth of lateral shoots. Many of these genes have been targeted during domestication and by adaptation under natural conditions. Emerging data emphasizes the importance of TCP proteins, and particularly their fine-tuned regulation, in integrating hormonal and environmental signals affecting development (Li et al., 2015; Nicolas and Cubas, 2015; 2016). 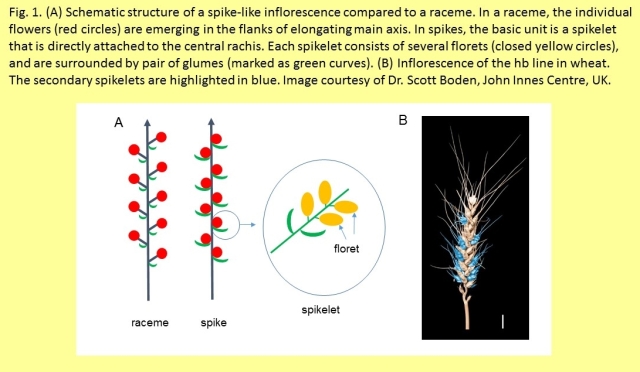 One of the founding members of the TCP protein family was the TEOSINTE BRANCHED1 (TB1) in maize found to suppress lateral branching, a major trait contributing to its domestication from teosinte (Doebley et al., 1997). Shoot branching control by TB1 orthologs is highly conserved among angiosperms, and a key trait also from an agronomic perspective (Nicolas and Cubas, 2015). A recent paper by Dixon et al. (2018) demonstrates a functional role for a TB1 ortholog of bread wheat (Triticum aestivum L.) in regulation of inflorescence architecture, providing potential to affect grain production. The inflorescence development in grasses involves complex branching events. While the indeterminate raceme in Arabidopsis elongates and develops individual pedicellate flowers in its axils, the basic unit in a grass inflorescence is the branched spikelet, a terminal unit capable of producing florets (Fig. 1A). In case of wheat, single spikelets develop in alternate phyllotaxis along the central rachis and each of them produce multiple florets. In their paper, Dixon et al. demonstrate that TB1 regulates the paired spikelet trait in wheat where two spikelets are formed in individual rachis nodes instead of a single one (Fig. 1B).

The highly-branched (hb) wheat line, analyzed in this paper, showed altered growth of lateral organs by developing multiple paired spikelets in their inflorescences as well as fewer tillers. The hb lines were delayed in their transition to reproductive development, and showed delayed inflorescence growth especially during early developmental stages (leaf stages L5-L7). However, the final length of the mature inflorescences was not altered. Analysis of the QTL region contributing to the paired spikelet trait revealed the presence of the TB1. The hb line showed increased (tetrasomic) dosage of chromosome 4D, and specifically the TB1 expression originating from the wheat D genome (TB-D1) was significantly upregulated both in hb tillers (including tiller buds) as well as in inflorescences during the stages when their growth was delayed. The dosage dependent TB-D1 regulation was confirmed by modifying the number of functional copies through crossings to tb-d1 mutant line, by analyzing the revertant phenotypes of hb plants as well as by overexpression of TB-D1 in transgenic plants. Intriguingly, Dixon et al. linked the TB1 function with regulation of flowering by showing that TB-D1 directly interacts with the major flowering regulator FT1, and that increased dosage of TB-D1 reduces the transcript levels of several meristem identity genes. The allelic diversity of TB1 in both B and D genomes was further associated with paired spikelet development in modern wheat cultivars.

This work connects branching control with regulation of flowering, and demonstrates a fine-tuned regulatory link between these major developmental events. The established model by the authors propose that increased dosage of TB1 reduce the availability of FT to activate spikelet meristem identity genes, and facilitates inflorescence branching by modifying the temporal timing or rate of spikelet meristem maturation. As the number of spikelets determines the seed number and crop yield – keeping in mind the possible adverse effects due to altered sink-source relations – this work adds a valuable gene from the TCP family among the breeding targets, not only in wheat but potentially also in other cereals as discussed by Dixon and colleagues.