Posted on January 23, 2014 by Flowering Highlights

After spending time with family during the Christmas holidays, it became clear to me how much we learn about ourselves by watching our relatives. This involves both similarities and striking differences. Although at a completely different time scale, a similar principle holds when analysing plant species and their genomes: depending on the goal of the analysis, a judicious choice of species to be compared with can be extremely helpful. In particular, it can be very useful to focus on a ‘sister species’, the closest relative of the group of species of interest. As I’ll describe using two examples, this is of clear relevance for flowering research. 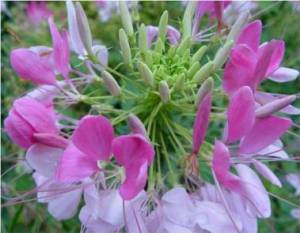 A few months ago, one example of such sister lineage genome analysis was presented through the Tarenaya hassleriana (Figure 1) genome (Cheng et al. 2013). Tarenaya hassleriana belongs to the Cleomaceae, which is the phylogenetic sister family of the Brassicaceae, including Arabidopsis thaliana and Brassica crops. One finding of notice in the comparison involved MADS-box transcription factors, which have various roles in flower development. The fate of these flowering regulators after a genome triplication that occurred independently in T. hassleriana and in Brassica was analysed. In general, after a genome multiplication many of the new gene copies get lost. However, a striking difference was observed between Brassica and Tarenaya: Brassica retained twice as many floral MADS genes as Tarenaya. Although further analysis is required, morphological diversity in Brassica was speculated to be related to this difference.
More recently, a second example was reported in the final 2013 issue of Science with the publication of the Amborella trichopoda genome sequence (Amborella Genome Project, 2013). Amborella is a shrub endemic to New Caledonia in the southwest Pacific Ocean. It has previously been indicated that it is the single sister species to all other flowering plants (Figure 2). In addition to analysis of structural aspects of genome evolution (which I will not discuss here), the Amborella genome enabled analysis of how flowering-relevant gene functions developed during flower evolution.

By comparing the Amborella genome to other available plant genomes, the ancestral gene content at key nodes in land plant phylogeny could be reconstructed. Roughly 25% of 5,210 gene families were specific to flowering plants and not found in non-flowering plants. This suggests that a diverse collection of novel gene functions was likely associated with the origin of flowering plants. Gene Ontology (GO) annotations related to reproduction were indeed overrepresented in this set of gene families. However, GO terms related to homeostasis and related to response to environmental cues, including herbivory, were even stronger enriched in these flowering-specific gene families. The latter was rationalised in the paper by referring to the importance of plant-herbivore coevolution in the diversification of flowering plants. As a side note, it is good to remember that there are many uncertainties associated with GO term analysis, including the fact that for many genes there is no experimental evidence for their function (Kourmpetis et al. 2011; Rhee and Mutwil). The remaining 75% of the 5,210 gene families were found in the common ancestor of all seed-bearing plants, both flowering and non-flowering. This suggested that flowering plants co-opted many pre-existing genes to the business of making flowers. One specific example discussed in the paper is again for the MADS-box genes. The data supports the hypothesis that duplication and diversification of floral MADS-box genes likely occurred before the origin of flowering plants, despite MADS-box genes being tightly associated with the origin of the flower. Apparently, as with us humans, what makes plants unique in comparison even with close relatives is not only which genetic components are present, but also the way in which these components are utilised!