Posted on April 29, 2013 by Flowering Highlights

It has been said for a long time and repeated as a mantra that plants do not flower even under inductive conditions until they get enough reserves for flowering. Such statement has finally been supported with experimental data. Wahl et al. (2013) have shown how the trehalose-6-phosphate (T6P) pathway controls flowering by regulating the 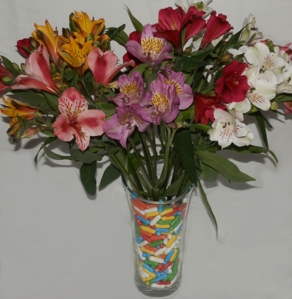 levels of FLOWERING LOCUS T (FT), a known florigen that responds to inductive day-length conditions, and by interacting with the recently described age pathway, regulating the levels of the microRNA156 (miR156). Flowering is controlled by many different genetic pathways that respond to the environment such as light or temperature, and to endogenous conditions like hormone levels or age (Fornara et al. 2010; Wellmer et al. 2010). Now a metabolic pathway has been added to these known genetic pathways. T6P has been proposed to relay information about carbohydrate availability acting as a central hub in carbon signalling (Lunn et al. 2006). Accordingly, null alleles of TREHALOSE PHOSPHATE SYNTHASE 1 (TPS1), encoding the enzyme that catalyzes the formation of T6P, cause embryo lethality (Eastmond et al. 2002). Low expression of TPS1 results in T6P reduction and in a late-flowering phenotype, whereas activation of TPS1 in the shoot apical meristem (SAM) promotes extremely early flowering.

Flowering is induced through the activation of a few genes called floral pathway integrators where all genetic pathways converge; among them FT and SOC1 play central roles (Fornara et al. 2010; Wellmer et al. 2010). Environmental conditions are sensed in the leaves and some mobile signals such as the FT protein or the hormones gibberellins move to the SAM, where flowers are produced, to induce flowering (Bernier 1988; Fornara et al. 2010; Wellmer et al. 2010). Wahl and collaborators (2013) have shown that most of the late flowering phenotype of plants with reduced levels of TPS1 was due to low FT levels, as constitutive expression of FT almost completely suppressed the late flowering of TPS1-downregulated plants. The fact that plants with reduced levels of T6P also flowered late under non inductive day-length conditions prompted the researchers to study other affected pathways. The age pathway has been proposed to function directly at the SAM and to repress precocious flowering. miR156 targets a set of SQUAMOSA PROMOTER BINDING PROTEIN-LIKE (SPL) genes, which promote flowering through the activation of the floral pathway integrators. The miR156 is highly expressed early in development and decays as the plant ages, allowing the activation of floral inducers (Yamaguchi et al. 2009; Wang et al. 2009; Wu et al. 2009). This ensures flowering in the event of non inductive environmental conditions. It is still unknown what regulates miR156 expression, but Wahl and collaborators (2013) show that T6P somehow controls miR156 levels as reduction on the biosynthetic T6P enzyme results in an early increase of miR156 levels, although these still gradually declined along development.

Taken together, T6P signalling acts both in leaves and in the SAM and integrates environmental (day length) and physiological (carbohydrate levels) signals together with the age pathway to promote flowering.